In June 2005, the House of Representatives unanimously adopted a resolution, recognizing the significance of the Caribbean peoples as well as their descendants in the history and culture of the United States. In February 2006, this resolution passed the Senate, and a Proclamation was formally issued by President George W. Bush on June 6, 2006. Thus, Caribbean-American Heritage Month was established.

Although we will get a more accurate number after the 2020 Census is completed, estimates place the Caribbean immigrant population of the United States between 4-5 million people, with almost a million living in New York City.

Depending on whether one is counting independent nations, colonies, or Commonwealth Territories – there are between twenty to thirty “nations” that make up the Caribbean,  with a total population of over 43 million people.

The Fordham University Libraries have over 3,000 print and e-books, and over 100 audio-visual items relating to the Caribbean. These are primarily in English, but also in Spanish, French and Dutch. While these are the primary languages of the Caribbean region, there are also local creole languages, such as Haitian Creole, Papiamento, and Garifuna. 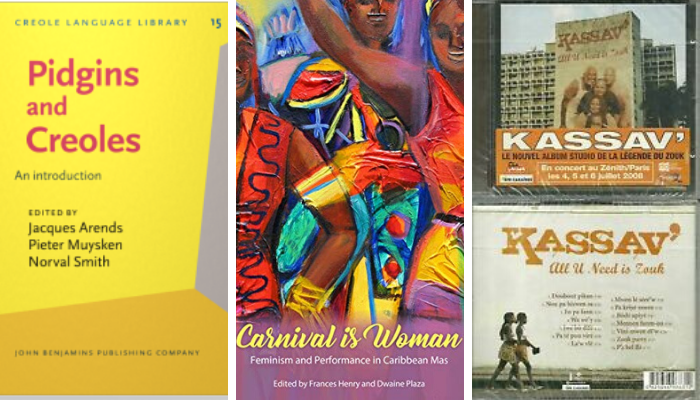 Pidgins and Creoles: An Introduction by Jacques Arends (E-book)

All u need is Zouk audio recording by Kassav’ (Lincoln Center, W CD 5954)

Fordham Libraries connects users to the Digital Library of the Caribbean (available in English, Spanish and French), an Open Access database with access to over 40,000 titles, multiple resources, and a monthly newsletter.

One of the best-known Caribbean-American essayists and novelists is Elaine Potter Richardson, better known by her pen name – Jamaica Kincaid (1949- ). Fordham Libraries have twenty of her books, published from 1985-2013. The Libraries also hold over 20 volumes by Saint-John Perse (1887-1975), the pen name of Alexis Saint-Léger (from Guadeloupe), winner of the 1960 Nobel Prize for Literature.

The U.S. National Archives contains a great deal of historical information, resources, and reports regarding Caribbean-American heritage (they include the U.S. territory of Puerto Rico as part of the Caribbean).

Among Fordham University alumni of Caribbean-American descent, one local social worker, community activist, and cultural preservationist is Mirtha Colon (GSS ’98). From Honduras, but of Garifuna descent, her background represents the complexities in determining what exactly is Caribbean – before it then goes on to become Caribbean-American. Her work with the Garifuna community of New York led her to establish the organization “Hondurans Against AIDS” with a headquarters in the South Bronx named “Casa Yurumein.”

The National Caribbean American Heritage Foundation is the official organizer of Caribbean Heritage Month. Although current events prohibit a calendar for 2020, from their website one can see what the organization has done in previous years.

The Founder of Caribbean-American Heritage Month is Dr. Claire Nelson. You can view a brief interview with her regarding the importance of the month here.

Although like much of our current social lives, the public events of Caribbean-American Heritage Month have been largely canceled for 2020, this does not negate the importance of the Month – or the community it represents. We can expect the size of the community, and its academic and literary achievements to continue to grow. To a full Caribbean-American Heritage Month next year!

More From the Blog